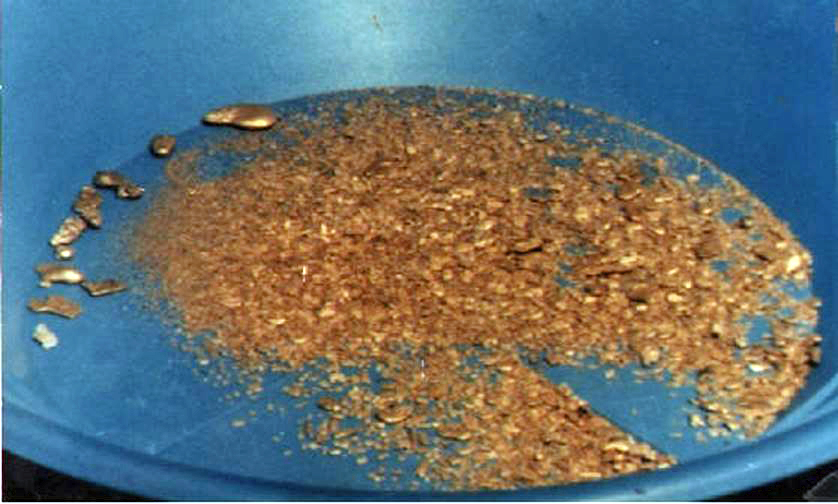 This all began as a dream in which I was diving for gold in a northern California river.  In this dream I surfaced from the river with a golf ball sized gold nugget in my hand.  “Here, Joyce,” I said, handing it to my youngest child. “There’s plenty more where this came from.”

It was December of ‘71 and I was the owner of a small prospecting and treasure hunting supply store in San Jose, California.  Because of a dream that I took as an omen—I knew (as so many before me have known) that gold was going to make me a rich man.  Without a second thought, I closed my shop, made an eight inch gold dredge and headed for the mountains of Northern California.

At that time I was a bachelor father of three, and they went with me.  We arrived on the banks of Oregon Creek, in the Sierra Mountains, just in time to pitch our tent on the already snowy ground at the beginning of a weeklong snow storm.  This ice bucket was to be our home for the next three months.  Never have I been so consistently cold for so long in my life.  After finding virtually no gold there, we moved on to the Yuba River.  Intuitively I knew the Yuba was where the gold would be.  We camped about 5 miles above Yuba City until early September.

It was next to impossible for any miner with the type equipment I had to do as poorly as I did.  During that nine-month period I found less than an ounce of gold—about $130 worth at that time.  However, some wonderful things did happen on that trip—I rekindled my love of nature and beauty.  And in that isolated spot I discovered God.

It’s hard to describe the loneliness of living like that.  Except for my kids, there was absolutely no human contact.  I craved adult contact.  I needed the sound of adult human voices.  Because of the way our camp was situated, closed in between two steep mountains, I couldn’t even get a radio station until about 8:00 in the evening.  And, the only station was a religious program—talk about a captive audience.  Every evening found me listening to Garner Ted Armstrong as he brought “The World Tomorrow” to any who would listen.

Radio preachers were always a turnoff.  It always seemed they spent too much time asking for donations to keep their “radio ministry” afloat.  But this guy was different.  He never asked for a dime.  Instead, he offered free books and literature.  Because I was lonely and he was a different type of preacher, I listened.  It didn’t hurt any that he was also a very gifted and fascinating speaker.  I’d often argue with him in my mind, but I enjoyed listening to him.

This was the beginning of my spiritual awakening.  I’m sure it was aided by lying out under the stars every night, surrounded by the grandeur of God’s mountains while being serenaded by the sound of the Yuba flowing by.  Altogether it added to the genuineness of what I was hearing.  It allowed me to better appreciate the wonders of God’s universe—even though I had entered into the deep throes of financial destitution.

It was September before I finally came to my senses and realized I wasn’t going to be a rich man after all.  I also knew my children needed to be back in school.  By this time, however, I was so broke I couldn’t leave. I had no place to go and, even if I did, I had no gas to get there on.  (It never dawned on me until writing this that we were homeless.)

One evening after Garner Ted Armstrong was finished, I got out of my sleeping bag and walked over to the river.  Clad only in my under shorts, I stood on top of the steep, sharp, rock cliff overlooking my dredge below.  The night was clear and beautiful. A billion stars lit the sky as the moon reflected off the river.  In contrast with all this beauty, my foolhardiness had finally hit home. I began to cry like a baby as I faced what seemed to be a hopeless situation. Not just a tear or two, either.  No!  I bawled.

And, I began to pray in earnest:

“God, I know I misinterpreted the dream and that I’ve been a fool” was the gist of what I said, (although it took about an hour to say it).  Then, perhaps, for the first time, I asked for help in getting out of there and in finding a place to live.  Finally, exhausted with nothing more to say or do, I went to sleep.

The next morning I arose, fixed breakfast and was just finishing putting on my wet suit, when a man came by.  “I’m interested in your dredge,” he said.  “Are you interested in selling?”

He pulled out five big ones and handed them to me.

Within an hour my truck was packed, the dog and the rest of my gear was in the back of the pickup, and my kids and I were were on our way to San Jose.

This event happened so uneventfully and naturally that I hardly made the connection between my prayer the night before and the buyer in the morning.  Oh, sure, I remembered praying, but I just assumed the man buying my dredge was just a lucky coincidence. I mean, it wasn’t like it was a miracle.  Or even an answer to prayer.  Some guy just wanted to buy my dredge.

Man was I lucky.

This is what I find fascinating...  I followed a dream into near oblivion.  But, the dream wasn’t wrong.  I found the treasure in my dream, it just wasn’t what I expected.  And, as I told Joyce in my dream, there was “plenty more where this came from.”

It was finding God that started my children and I going to church and which finally culminated in my becoming a Presbyterian pastor now serving in Reedsport, OR.

I never forgot the relationship between God, man and nature that I discovered while mining. At night when my children were asleep and I was alone, I was overawed by the immensity and beauty of God’s handiwork.  So awe-inspired, I couldn’t help but worship.

For years afterwards I hungered for the isolation of the mountains, the song of the river, and the grandeur of the night skies.  I hungered for the connection I found by the river.  So, about fifteen years later, I gave mining another try. This time it wasn’t so important I succeed—I had no dream of excessive wealth.  I was going after the true treasure once again.

My son, Lloyd and I worked for a full year, and once again we were camped alongside a beautiful flowing river—the Klamath this time, not the Yuba.  I’m pleased to report we did much better.

During that last year when we once more lived in a tent, no one came up and offered to buy my equipment.

This time there was no need.