(Many examples of the KSC in action)

Sunset off the Oregon Coast 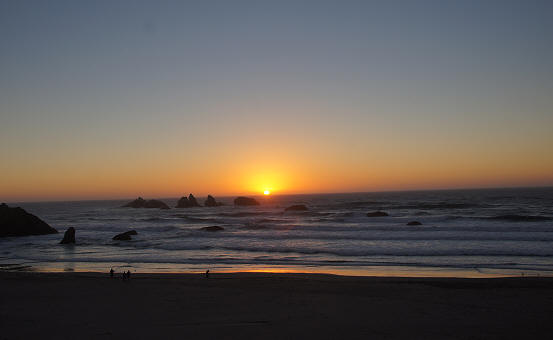 The Kindred Spirit Connection took a long time to recognize.  What it is, is an observation of the manner in which the Universe responds to certain individuals, and is based primarily on experience, observation and realizations that sprang from a sudden understanding that unusual things seemed to happen (seemingly) coincidentally when a need arose, and also that there seemed to be a spiritual connection involved with each occurrence.  Let me show you what I mean...

Somewhere around 1978 I was a struggling painting contractor in Virginia Beach.  ("Struggling" may not be strong enough.) I had gone to Virginia from San Jose, CA, because my brother needed help with his own business.  When that didn't pan out I went into business for my self.  Not knowing anything about painting other than thinking, "Anyone can paint," I began "Tohill's Maintenance Service."

Now, for the next three or four years my poor family suffered while I struggled to make ends meet while both learning the painting business and what it meant to be self-employed, all the while dreaming about going back to San Jose.  Somehow I could never get the money together.  Then, one morning while sitting at my desk going over my books, I realized I had just cleared over $3000...it was something like $3046.36 profit.  At that moment, in my mind, my truck was loaded (I had a large truck with a 20' L X 8' W bed.), my family was in the front and we were on our way to San Jose.

Man, I was so excited.

That night the phone rang; it was my mother.

"We need your help.  Your father has to go into the hospital and I need someone to look after me. Can you come?"  (Mom was an invalid with Parkinson's disease  two heart bypass operations and two strokes. She couldn't make it alone.)

As I said, "Yes, momma," in my mind I literally saw greenback dollars take wing and fly off.  I instantly knew we weren't going back to San Jose.

The trip to Florida, staying for a month, including travel expenses and supporting two families—one in Florida and one in Virginia—came to $3046.16.

I always thought that my figures were probably off by 20¢.

That's only one instance of the KSC in action; a good person needing help, gets the help they need by everything falling into place.  It only happens when the people are spiritually connected via our Creator.

Just so you know, the last thing in the world I'm trying to do is sell religion—not mine, yours or anyone else's.  What I am trying to do is to bring an awareness of what's going on around us all the time; that we're not alone and that miracles happen everyday to people everywhere.  So much of the time we see what happened and think, "Boy was I lucky."

Luck had nothing to do with it.  For example, we see a disaster and think it was just luck nobody was hurt.  For as long as I can remember there have been hurricanes, tornadoes and hellacious storms in the South and the Midwest.  Newscasts inundate us with pictures of horrendous destruction that goes on for for miles.  Houses reduced to rubble and splinters.  Often there are no casualties; sometimes only one, or two or, three.

Question: how can this be, given the utter destruction?  Answer: only by unseen intervention.

Yes, homes are destroyued, homes are expensive, but they are absolutely valueless compared to human life.  Your life is important; your property isn't.  So we should always give thanks for not being hurt or killed.  This may be just the opportunity to start over by getting out of the rut we're in.

Hopefully this website will help to solve some of life’s more perplexing problems...not by telling you what to believe, or what you should do, or how you should live, but by sharing some of what I’ve been through and some of my discoveries.

May your mind be open